The international music festival Jazz Province wrapped up this year with a concert in Pskov. In the space of a month its performers had visited over 10 Russian cities — from Krasnoyarsk in the north to Krasnodar in the south. Thanks to its travelling format, Jazz Province is already in its 17th year of bringing quality music to jazz lovers who live far from the cultural capitals. 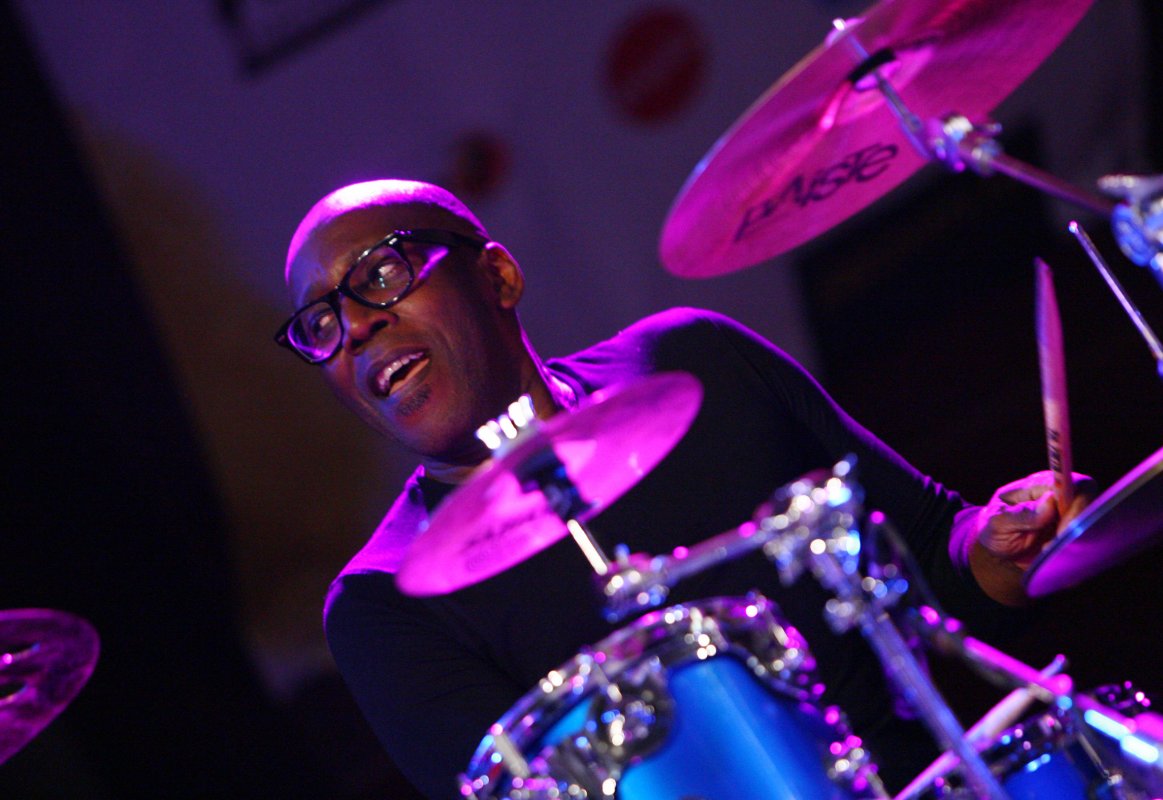 More than including the word “province” in the festival’s name, the project’s creators ceded first place not to Moscow or St. Petersburg, but to the center of world jazz — New York. Finances make it impossible to invite the most famous jazz performers, but the festival boasts brilliant world-class jazz musicians and little-known Russian jazz groups. It also offers master classes for music students and meetings with the legends of Soviet jazz.

This year, the famous American saxophonist Ernie Watts performed at Jazz Province. Watts first made his name in the 1960s. Today his solos are taught in music schools, but his “Highway Blues” (recorded with Marc Seales) is familiar to most computer users as part of Music Models Windows XP.

The surprise of this year’s festival was a joint performance by a Russian-American jazz quintet and the folk ensemble Rostan from Kursk Region. A saxophone, bass guitar, electronic keyboard and drums shared the stage with girls in homespun peasant Russian dresses similar to those worn 200 years ago. The Russian folk ensemble performed authentic renditions of ceremonial songs, while the jazz group improvised on Russian folk themes. 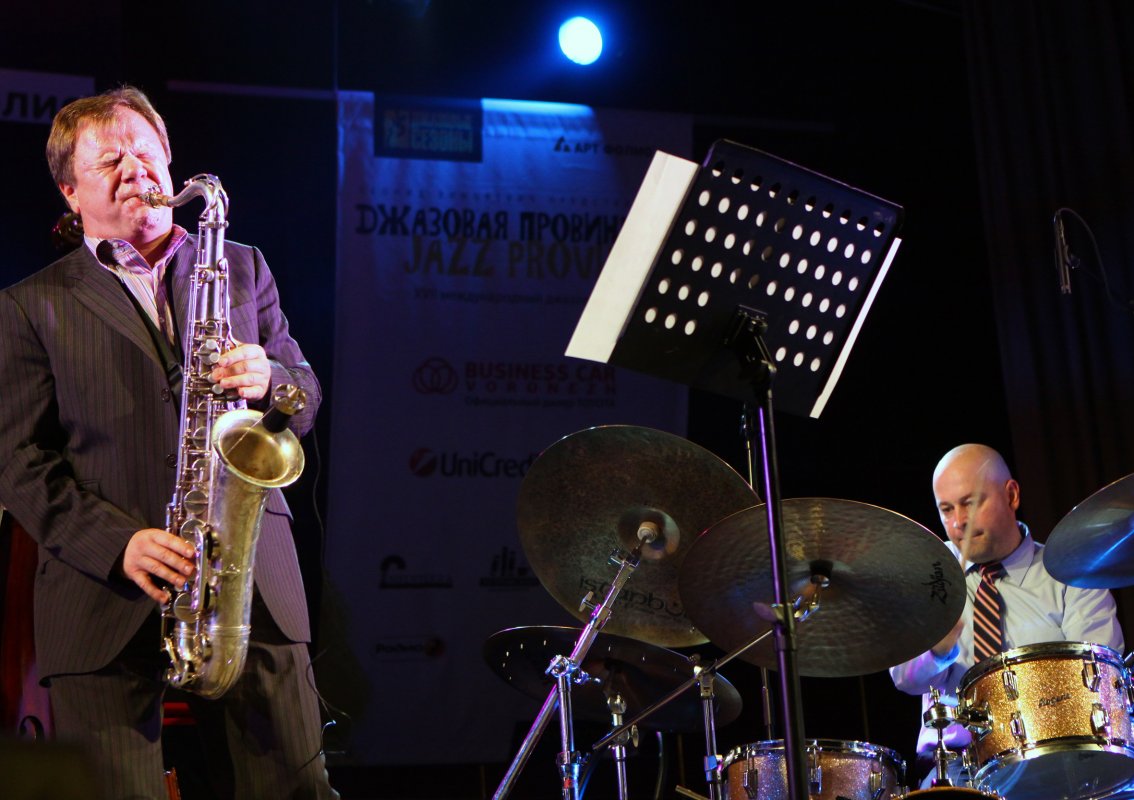 Folk improvisation depends on one’s mood. The American performers — guitarist and all-round musician Mike Miller, drummer Joel Taylor (a Jazz Province regular) and bass player Kip Reed — found this difficult at first. After all, jazz variations are constructed according to canons. But in the end, the Americans were all pleased with this experiment and even recorded a studio album with Rostan. 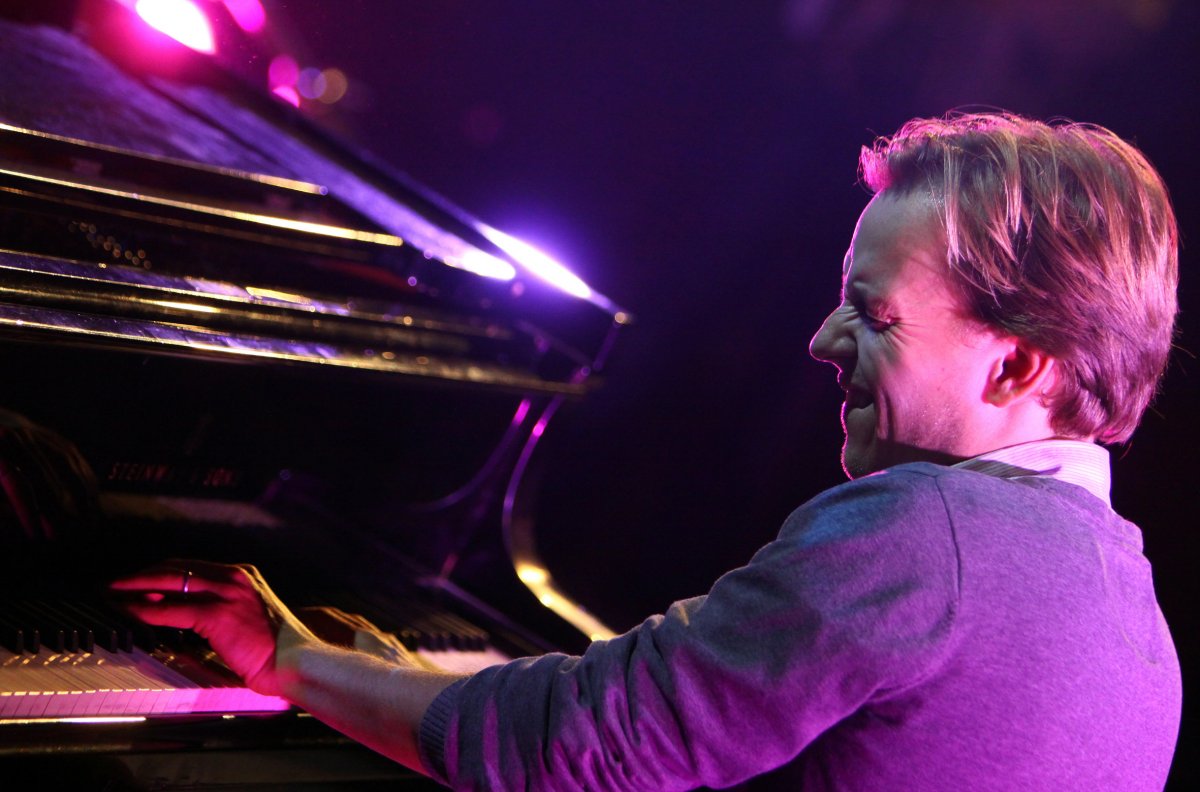 This unique music festival was the brainchild of the master pianist Leonid Vintskevich. For the past 30 years, Vintskevich has been playing with the world’s leading jazz musicians, even though he prefers to live in his native Kursk. In 1989, when jazz concerts were of little interest in the Soviet Union, Vintskevich was a guest at Lionel Hampton’s prestigious festival in the American town of Moscow in Idaho.

A Center for Jazz Research is being created in Yaroslavl to preserve valuable documents and audio recordings relating to the 90-year history of the genre in Russia. The documents include copies of denunciations by a KGB agent who kept tabs on jazz in Moscow. Official archives contain no such papers, while private collections often end up being trashed after the deaths of their owners. For example, materials relating to the Soviet Union’s Group for the Study of Jazz were very nearly lost. This unofficial group appeared in the 1960s; its members lived at opposite ends of the country and were not personally acquainted with one another. They would type up copies of works about the history and practice of world jazz and distribute these to trusted individuals, according to the system then known as “samizdat” (independent publishing). Yuri Vermenich of Voronezh translated 38 books about jazz from English. From the late 1950s, he corresponded with famous performers, such as Ella Fitzgerald, and organized concerts of Soviet jazz groups. Some of Vermenich’s books were officially published in Russian in 1999-2000. 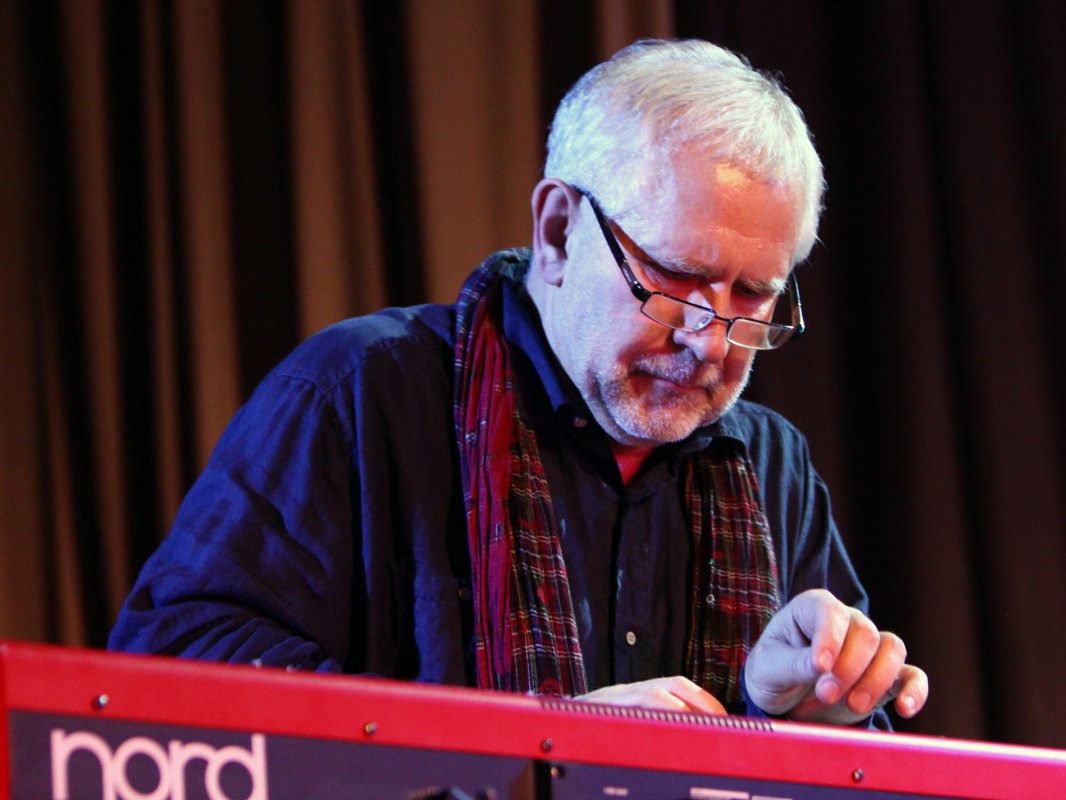 With a population of only 25,000 (a fraction of that of Kursk), every evening’s performance was attended by some 10,000 fans.

“It was as if half the country had turned out. That just staggered me!” said Vintskevich. “I thought, why not do something like this in Russia?”

With Lionel Hampton’s warm support, Leonid managed to turn his own annual Jazz Days in Kursk into a full-fledged festival. He spent whole days on the phone at home, negotiating with foreign musicians, personally arranging hotels and transportation, finding sponsors, and so on. In 1998 Jazz Province — complete with managers, musicians, instruments and lights — fit into a single double-decker bus. 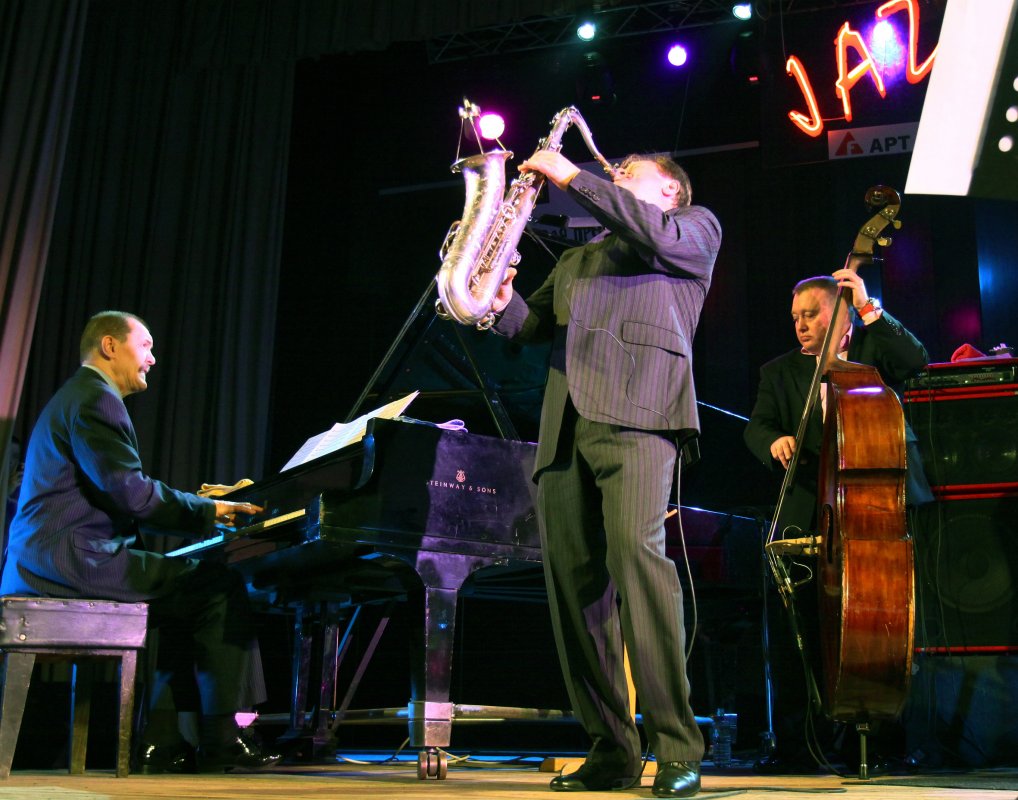 Today, the performers travel around Russia in large groups with convoluted itineraries that take them to new cities every year.

“To me the idea of a traveling festival makes great sense,” said Catherina Palvair, a French vocalist who performed at Jazz Province 2012. “Live music should go to people if they can’t cover large distances. Music should circulate in the world, like the blood in our veins.”

In the early days, this Russian musical marathon required real heroism from the foreigners who took part in it. They stoically endured the various inconveniences, such as the lack of civilized restrooms on Russian highways. 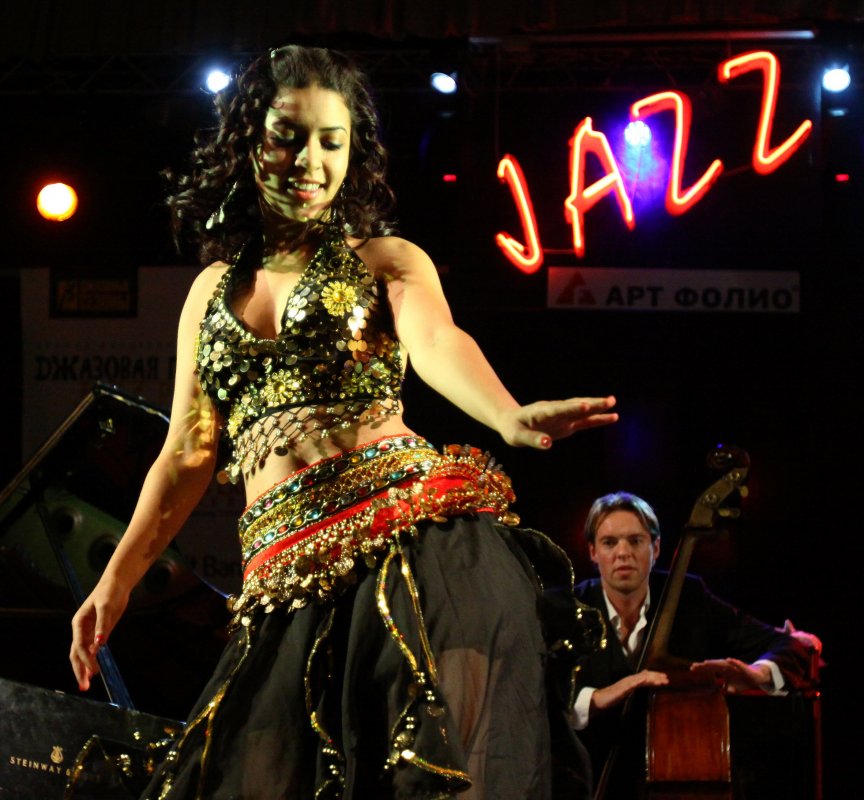 During the breaks between concerts Palvair was always out taking pictures. She was especially struck by the variety of female types, the orthodox churches and the carved, cast-iron urns in the form of lips in Stary Oskol. Palvair made sure to buy herself a pair of embroidered felt boots (“valenki”) at a bazaar. She had heard the folk song “Valenki-Valenki” performed by Nina Ruslanova. 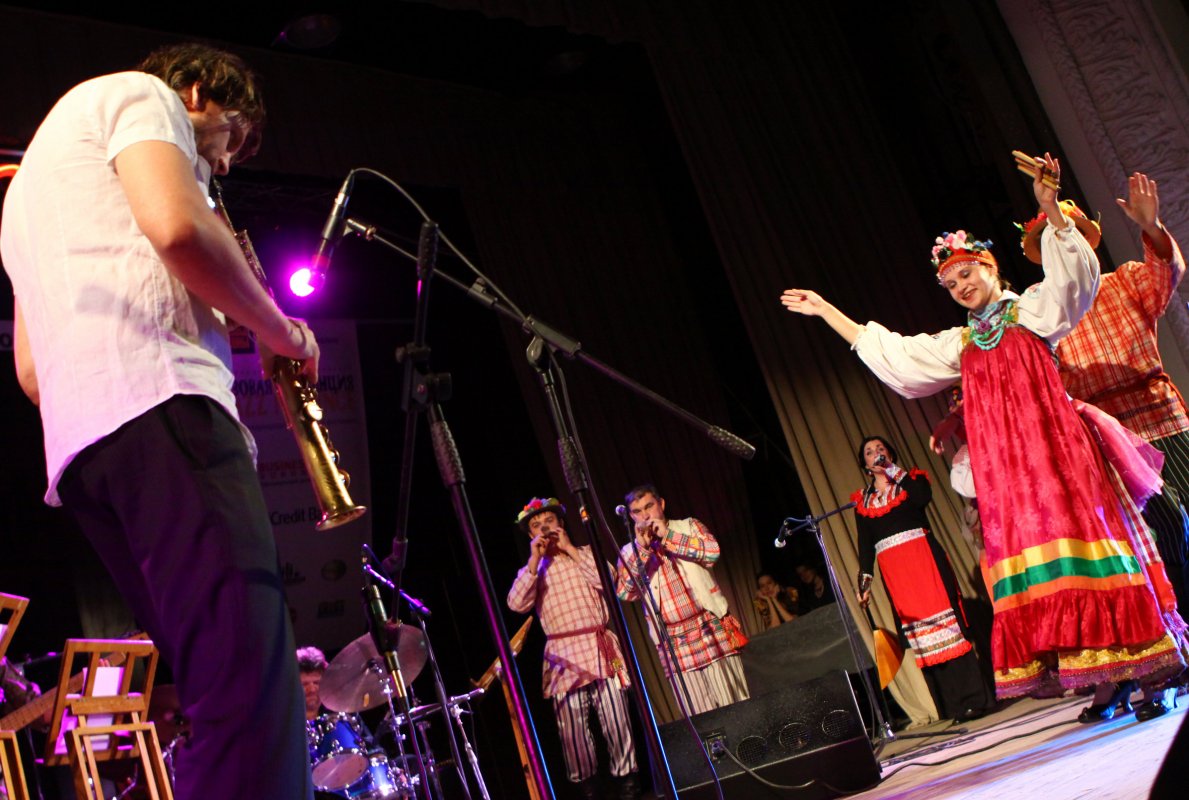 “Should I not talk about the holes in the asphalt?” asked saxophonist Neil Gerstenberq. “I was amazed that, in Russia, when you ask, ‘How much longer do we have to go?’ the answer is usually something like, ‘500 kilometers.’ People will tell you the distance, but never how long that distance will take! I guess traveling time here is unpredictable — especially in Moscow, where the traffic is incredible. France is nothing compared to this.”

Once upon a time, Jazz Province was free to all comers. The only thing guests had to do was show up to the event. In some cities there were no other jazz events. The unsophisticated audiences were sometimes scared by the “academic” atmosphere of the philharmonic, where most concerts were held. Now, festival tickets are in great demand, though not very cheap. 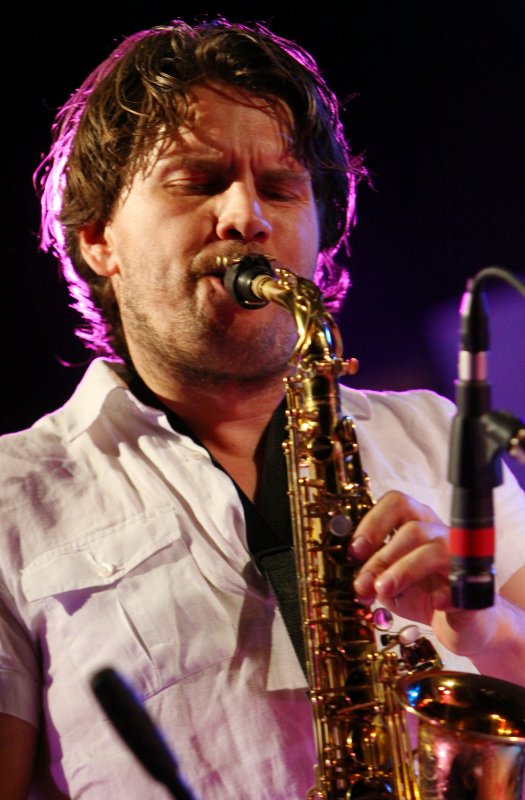 In Tambov a small jazz festival has appeared, and, this year in Voronezh, interesting foreign groups have begun to appear. The local music school in Voronezh now has a department specializing in variety performance, as well.

“We’ve performed here in clubs and in halls with 500 and 1,500 seats. Full houses everywhere! In Europe that rarely happens. Music lovers show up mainly to criticize the performers,” said Gerstenberq. “In Russia, it’s as if we’ve gone back 20 years, when you played music and people listened with great enthusiasm. Where has that gone?”

Jazz Province is currently on the schedule for the Cultural Olympics at Sochi 2014.

Source: rbth.ru (Russia Beyond The Headlines)